The New Normal – A Change In Perspective

My guy likes to have fun.

My husband, Paul, is almost two weeks post mountain-bike accident.  During that first week while he was in the hospital, I had a bit of time.  Time to pray – cry – hope – reflect – give thanks – and time to text, e-mail, and call the first wave of family, friends, and neighbors.

Then he was released and ever since, I’ve barely kept ahead of the snowball of communication as word spreads.  Thank goodness for those family, friends, and neighbors who are keeping us afloat as my time vanishes.  I’ve decided (upon the advice of good friends who’ve been there before) to communicate most of our future news and developments via blog posts which I will simply categorize under “All About Paul”.

In this post, I’ll try to summarize what happened and bring our situation up to date.

Imagine a sunny spring Tuesday afternoon (May 6, 2014).  My athletic, outdoors-loving, husband lets me know he’s going mountain biking at Comlara Park at Lake Evergreen, where there is no mountain, but lots of trails specifically designed for people like him.  People like me look at the obstacles and decide—maybe not.

I arrive home from work before 5 pm to find our dog, ZuZu, ready for her walk and dinner.  No Paul, but it’s a beautiful day, so I know what he’s still doing.  By 6 pm, I’m settled in a chair with my laptop, preparing for my weekly teleclass for my master screenwriting program (one of my favorite times of the week).

My heart does a little flip.  But then… my husband has a history of being a bit of a trickster.

There’s something in his voice that makes my heart flip once more.  But—again, he likes to tease me.

I fly out the door, hoping he’s playing his game.  I race the five blocks from our house to the hospital ER, my heart beating faster the closer I get.  I turn the corner, and there’s his car.  He looks sick, green.  I don’t see any blood — no bones sticking out of him.  Maybe he’s okay.

After a brief Q & A, he grows testy and I can feel the fear from inside him because he can barely move his right hand.  At his insistence, I remove his shin guards and tell him to stay put while I get the ER staff to come out.  He argues and insists on walking to the entrance about 50 yards away.  When I suggest he at least let me grab a wheelchair, he unsteadily starts lurching by himself.  I do what I can to support him, knowing I will have no effect at keeping him still now that he’s decided to move.

I learn a few details and as soon as we walk in the door, I say he’s had a bicycle accident, was thrown on his head, feels nauseous, and he’s whisked into a wheelchair into Trauma One, where a neck brace is applied and it all begins.

Before fast-forwarding to the injuries, this is what happened; pieced together from what he said during the time in ER and after his surgery.

He was riding (alone) on Trail #3, and approached a ramp, which consisted of a series of planks over a tree stump in the middle of the trail. I believe this one rose up 3’- 4’ in the air, leveled out, and ramped down.   (See Paul’s comments for the bike group on FB here.)

As Paul ascended, something (his pedal?) caught on the ramp, and pitched him forward off the bike, over the handlebars.  He probably did a somersault, landing on his back, shoulders, neck, and head.  The bike followed and bounced off his chest.  Yes, he was wearing his helmet.

He says the one he used was shorter and a bit steeper, but same concept.

We’re not sure if he lost consciousness for a short time, but when he realized what happened, he lay in the grass knowing he couldn’t get up immediately.  He couldn’t feel his right arm, which scared him.  He said he knew he’d “really jacked up his body”.  He tried to get up, but felt nauseous, so he stayed down.  Sometime later – 20  to 40 minutes, another mountain biker came along, followed by two more.  They debated helping him up.  (Paul had his cell on him, and could’ve called 911 or me at any time, but didn’t think it was that serious.)

Ultimately, and I’m sure at my husband’s insistence, they got him up, and started walking.  I think he was a bit shaky, because one of them got his truck and drove back into the area where they loaded Paul and his bike (which was undamaged – let’s get our priorities straight here; we’re talking mountain-bikers) into the vehicle.  They took him to his car and helped him in, again questioning whether he should drive. 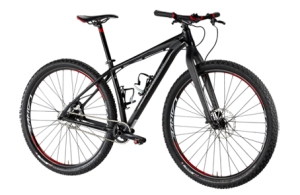 Not his exact bike, but an example: Specialized Carve 29’er SS Rigid – I’d like to say it’s for sale.

Hindsight is not a luxury during a time of crisis, and although some have second-guessed the decision to get him up and let him drive, I know my husband, and I am confident he insisted on helping himself.  Also, we are truly thankful someone found him at all and at that point, he was in God’s hands.

After x-rays, CT scans (with thousands of views), MRI’s (one botched thanks to Paul’s claustrophobia), blood tests, urine tests, and I frankly don’t know what else, we were told Paul suffered the following:

– Basically, he had a broken neck;  3 cervical vertebrae, 3 thoracic vertebrae

– 8 ribs (2 floating which means they broke from the sternum), and a broken sternum/breastbone

– Nerve damage to his right arm/hand

I’ll spare the details leading up to surgery including a day and a half in ICU, the evaluation, the repeat tests, his pain, and the agony of realizing how serious his injuries were.

Basically, Paul’s vertebrae were fractured on both sides of his spine which put his spinal cord in a very precarious position of being compromised at anytime.  His skull and upper seven vertebrae were literally not attached or anchored any longer to the rest of his spinal column, as I understood it.   Fifteen years ago, his head would have been screwed into a Halo brace.

The doctors were serious when they said it was a miracle he lived, not to mention not being paralyzed, as a result of the accident and his movement afterward.

His surgery lasted over seven hours, partly because the surgical team constructed a special table to “flip” him over once the first part of the operation – inserting a plate with four screws through the front of his neck, was completed, so six more screws and four rods could be attached through the back of his neck/nape area, and he had to be painstakingly positioned because of the precariousness of his fractures shifting.

I was blessed to have the company of family and friends, plus many texts, calls, and e-mails, during that time, plus updates from the surgical team, as his surgery progressed.

I won’t go into all the nitty-gritty (not yet anyway…) of his six nights in the hospital, and observing his excruciating slow progress (which frankly hurt to watch), but ultimately, he was released to come home just shy of a week.

Today is his sixth day home, and again with the help and support of friends and the hospital’s home program, we are adjusting and making it work.

His progress is slow, but I see some sort of improvement every day.  The doctors are optimistic he will have a full recovery, although I believe patience will become a learned trait for my normally kinetic husband.

Right now, I want to combine communication of what’s going on with Paul to this central place for those I cannot reach out to as often as I’d like.  I will continue to post as developments progress.  He sees two of his doctors next Tuesday, so we are looking forward to hearing what they think.

We are both grateful for everything that has transpired in the way it was meant to happen.  While there may be some dark moments, we know they could be darker, and we are thankful to be where we are.  It was an accident and it has re-prioritized what’s important and how we spend our time.

We are especially thankful, again to the guys who came to his rescue, and the medical staff at BroMenn, from the fast-acting emergency care to the nurses who kept him in line to the many doctors and surgeons who all had an amazing impact on his recovery.

There will  be touching moments, frustrating moments, learning moments, retrospective moments, humorous moments, and insightful moments.  Having a 2 lb. lifting restriction opens a whole new world of what can and can’t be done, for example.

I know I will be sharing and am hopeful Paul will choose to be a “guest” blogger when he wants.  As he gets better, I will let you know.  I’ve been very protective to let him heal, and will always err on the side of being overly cautious.  He is beginning to reach out as he feels more able, although I’ve noticed his progress ebbs and flows when he’s over-reached, something I try to make him aware of.

A different type of biking – Paul is the guy in the white shirt in the middle.

It is our new normal and we will adapt.

Thank you for your support and prayers.  ~ P & G

36 Responses to The New Normal – A Change In Perspective