My Husband is a Koala Bear.

Seriously, do you see the resemblance?

Not just because he’s cute and hug-able.

Did you know Koala bears sleep 18-22 hours a day?  Since his accident, Paul has taken naps.  Lots of naps. He’s trying to do more and more things, but for every effort, he has to rest:

The surgeon told Paul he’ll continue to feel worn out for another 6 months.

For the record, Paul and I disagree on the amount of time he naps as he feels he’s tapering off.  Perhaps he is, but from my vantage point, falling asleep in the middle of a movie counts as a nap.  Coming home to find him sacked out with his mouth wide open counts as a nap.

(I’ve asked him to guest-post if he’d like to set the record straight – no editing on my part.  Maybe the next one.)

Yesterday marked 6 months post-surgery, that magical deadline when “things” are to start happening.  Like… the internal swelling in his neck could start to subside and reduce the pressure on the nerves controlling his right thumb and fingers.

His occupational therapist was overjoyed this past week when Paul slightly moved his right thumb into a certain position he’s not been able to reach before, so we’re cautiously (and super) optimistic.

One thing I love is that Paul never stops trying.

Overall, he’s pretty much back to normal, except for tiring out, loss of upper body strength, and use of his right hand (single-digit typing for example).

In measurable achievements , he runs regularly, sometimes taking ZuZu along.  He joined a water-aerobics class with some older ladies with whom he made a pact:  What happens in the pool stays in the pool… 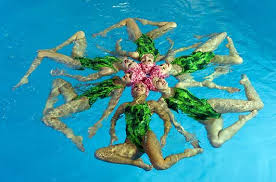 We can only imagine.

The music he plays on his guitar is often identifiable (cannot hold a pick but able to strum with his finger), and he’s back to almost 100% of the cooking, which includes making breakfast, packing my lunch, and usually preparing dinner.  I also love that he knows me so well.

One huge breakthrough Paul had was pulling the lawnmower cord to cut the grass.  Yes, we had a huge celebration.

We’re seeing real light at the end of the tunnel.  I recently transitioned to a new job and am working on my master screenwriting certificate, so with Paul’s efforts to return to as much of his past routine as possible, I’m starting to feel like I’m not falling off the edge of the world anymore and yes, I might be able to catch up on my to-do lists.

This Thanksgiving season, I’m especially grateful for the patience and kindness of our friends and family and most of all, I’m thankful for my Koala bear guy.

8 Responses to My Husband is a Koala Bear.